ART, FILM
3 weeks ago
by creativmag
0

On Friday, July 22, three Miami-based filmmakers, Terence Price II, Ronald Baez, and Diana Larrea, debuted their new real-life, short documentaries about some of the most pressing issues facing Miamians during a “Pass the Mic: We Will Tell Our Stories” community event presented by Community Justice Project and Oolite Arts. 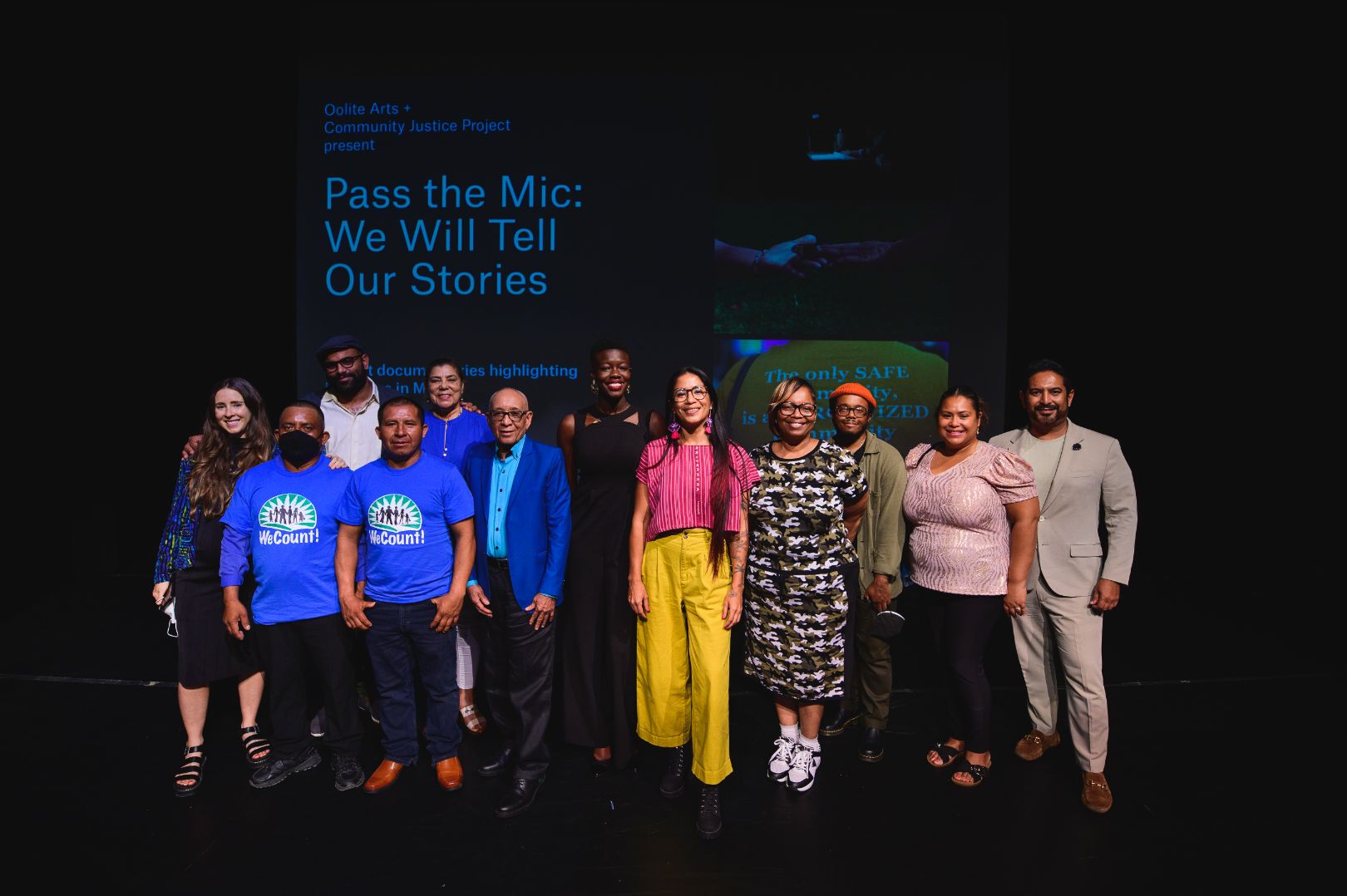 Through these filmmakers’ use of powerful cinematic storytelling, we learned about how:

Two Guatemalan day laborers in Homestead whose fight against wage theft (more than $33,000 in missing wages) by a local roofer takes them on a journey of activism for vulnerable undocumented workers, while experiencing their own personal transformations. Note: Florida leads the country in wage theft. More than $1 billion are stolen every year from the pockets of workers. 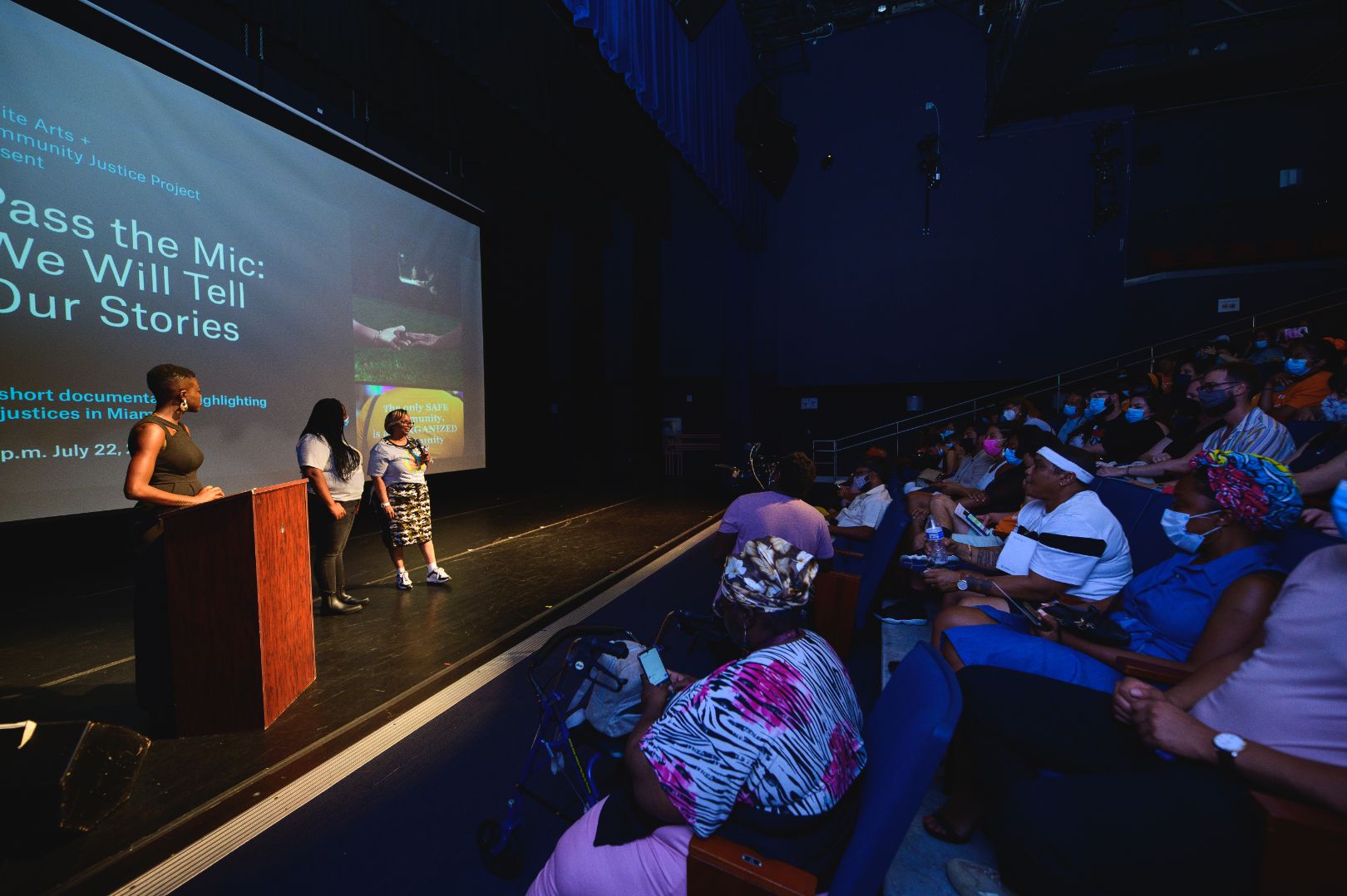 Miami Workers Center and its members, made up largely of working-class women of color, as they successfully fought to enact the first Tenant Bill of Rights in Miami-Dade County in May, affording more legal protection to renters, many of whom were already fighting rising rents and threats of evictions. The filmmaker behind the Tenant Bill of Rights documentary, Terence Price II, faced his own eviction earlier this year. 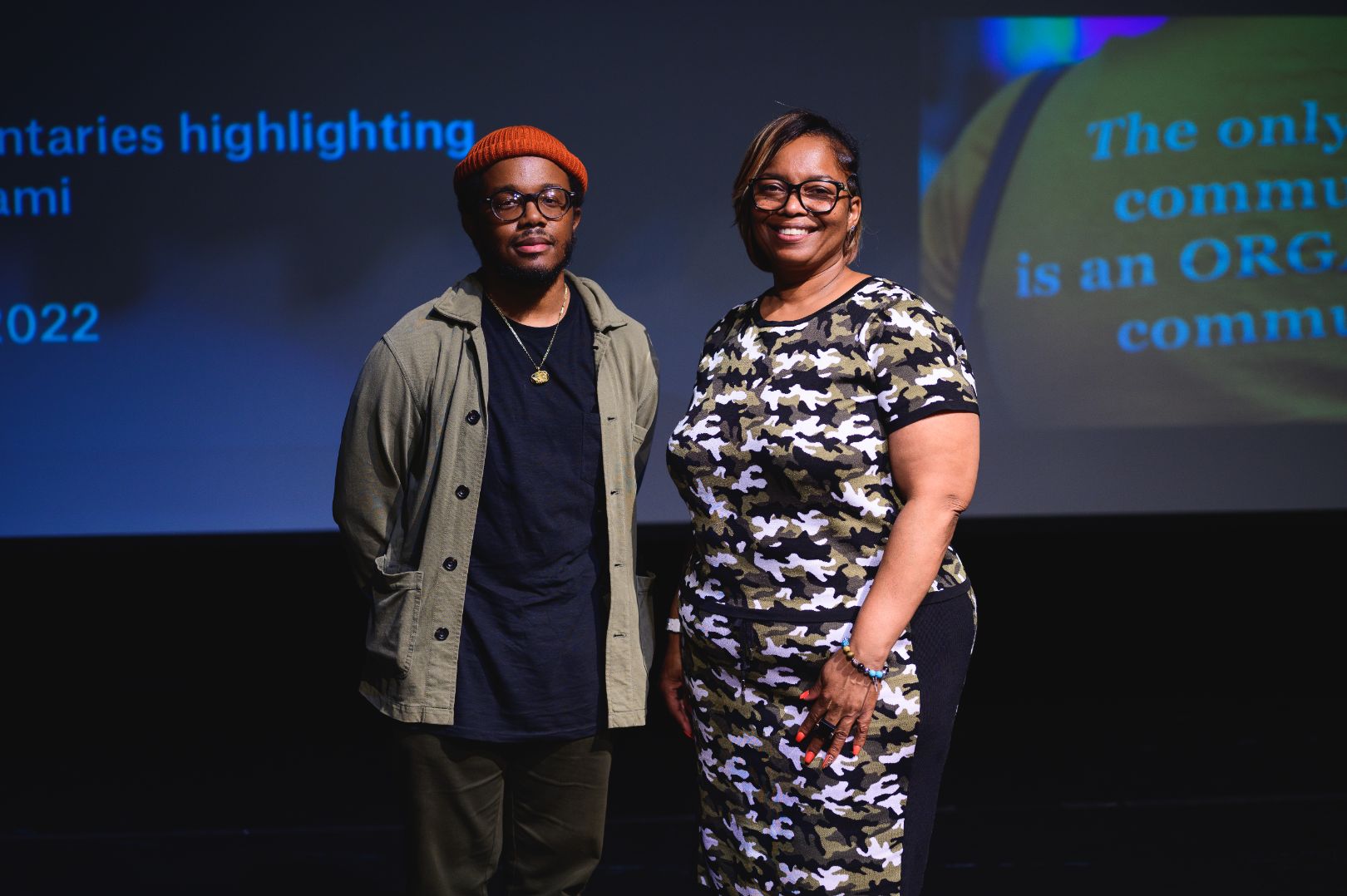 Three Miami-based filmmakers, Terence Price II, Ronald Baez, and Diana Larreadebuted their new short documentaries about issues facing Miamians during a “Pass the Mic: We Will Tell Our Stories” community event held on July 22 at the Little Haiti Cultural Center. Presented by Community Justice Project and Oolite Arts, this impactful initiative is in its second year and uses powerful cinematic storytelling to shine a spotlight on urgent topics that have all made headlines over the past year and to show how communities are tackling these issues. This year’s topics included the fight for a tenants’ bill of rights, wage theft of undocumented workers, and surviving as a small business in a gentrifying neighborhood. 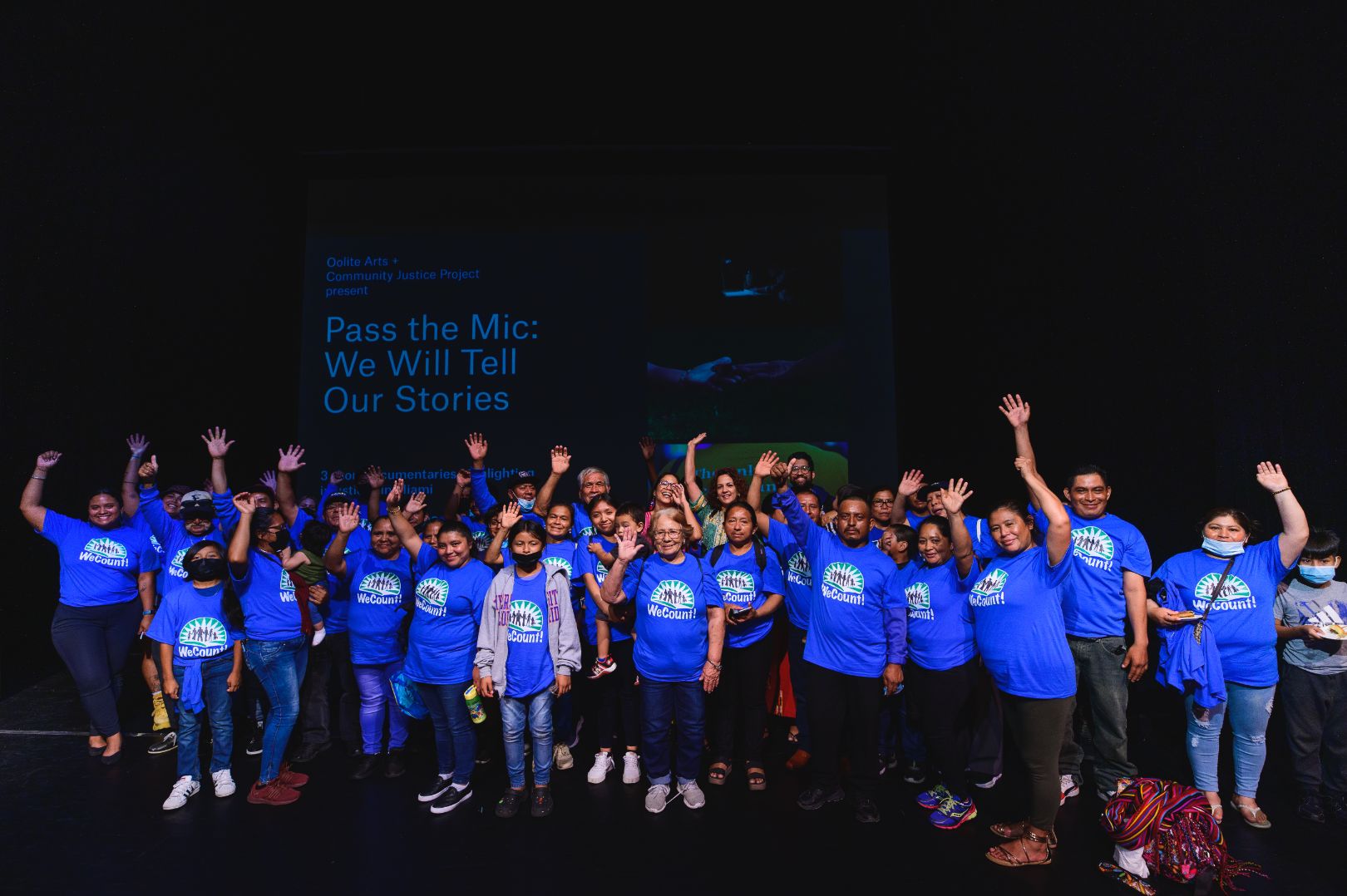 In the making of these films, the filmmakers were partnered with community experts directly impacted by these issues, as well as local nonprofit organizations including the Allapattah Collaborative CDC, WeCount! and Miami Workers Center.

“Apart < A Part”: This film tells the story of Allapattah’s Aquino the Tailor. His shop, which has been in the neighborhood for decades, is under pressure from rising rents as the neighborhood changes around him. The film follows him as he creates a guayabera by hand and reflects on keeping his business alive. The film is by Ronald Baez in collaboration with Fidel Aquino (aka Aquino the Tailor) and the Allapattah Collaborative CDC.

“Monarcas”: This documentary follows two Guatemalan day laborers in Homestead whose fight against wage theft by a local roofer takes them on a journey of activism for vulnerable undocumented workers, while experiencing their own personal transformations. With the help of the nonprofit, WeCount!, the men and their colleagues sued their roofing employer for back wages, but their fight doesn’t stop there. They were able to successfully sue their employer for more than $33,000 in unpaid wages but still have yet to collect the hard-earned money they are owed and use to support their families. Florida leads the country in wage theft. More than $1 billion are stolen every year from the pockets of workers. Filmmaker Diana Larrea created the film in collaboration with community experts Alejandro and Pedro and WeCount!

“Rooted like a Tree”: This new film follows the Miami Workers Center and its members, made up largely of working-class women of color, as they successfully fought to enact the first Tenant Bill of Rights in Miami-Dade County in May. The bill of rights affords more legal protection to renters, many of whom were already fighting rising rents and threats of evictions. “I want the community to see the work that people put into this – workers from our community, Black and Brown women, domestic workers – and how they were able to come together to do something that’s never been done in Miami,” said filmmaker Terence Price II, who created the film in collaboration with the Miami Workers Center.

“Storytelling is powerful, and it is necessary that we democratize who gets to tell the stories of Miami-Dade,” said Nadege Green, Director of Community Research and Storytelling at Community Justice Project. “When we consider the important issues our communities face, we have to amplify the voices of the people directly experiencing these challenges and fighting for justice in Miami-Dade.”

Oolite Arts, the Miami-Beach organization that works to advance the careers of Miami-based artists, believes that filmmakers have an important role to play in communities.

“The arts can play a powerful role in the search for social justice,” said Dennis Scholl, president and CEO of Oolite Arts. “Real stories, like the ones told through ‘Pass the Mic’ can cause you to see the world in a different way and move people to action.”

About The Community Justice Project

Community Justice Project is a group of community lawyers and researchers that supports grassroots organizing for power, racial justice and human rights with innovative lawyering, research and creative strategy tools. Based in Miami, Community Justice Project is deeply and unapologetically committed to Black and brown communities throughout Florida.

Oolite Arts helps Miami-based artists advance their careers and inspires the cultural community to engage with their work. Established in 1984, the nonprofit is both a community and a resource, providing visual artists with the studio space, exhibition opportunities and financial support they need to experiment, grow and enrich the city. Through its educational programming, Oolite Arts helps Miamians learn about contemporary art and develop their own artistic skills. Coming in 2024—in time for the organization’s 40th anniversary—Oolite Arts will open a new campus in the City of Miami that will help build Miami’s next creative chapter. For more, visit oolitearts.org.

Exhibitions and programs at Oolite Arts are made possible with the support of the Miami-Dade County Department of Cultural Affairs and the Cultural Affairs Council; the Miami-Dade County Mayor and Board of County Commissioners; the Miami Beach Mayor and City Commissioners; the State of Florida, Department of State, Division of Arts and Culture and the Florida Council on Arts and Culture; the National Endowment for the Arts; the Jorge M. Perez Family Foundation at the Miami Foundation, the Lynn and Louis Wolfson II Family Foundation, and the John S. and James L. Knight Foundation. For more information, visit oolitearts.org. Follow @oolitearts on social media.