As a flood of enthusiastic spectators make their way into the theater at AMC Aventura, the excitement behind the love and support could not go unnoticed. Cheers and tears of joy filled the room as the audience was left in awe and swiftly prompted to a standing ovation congratulating the  director and executive producer of BOYO, Samuel Dameus.

Any movie able to extract a spectrum of emotions out of any audience is surely deemed excellent. If you are from Haiti and never had the opportunity to visit certain remote places of the country, this movie will enlighten you immensely. Though the element of story-telling may have played a role in categorizing this movie as entertainment, it also included educational fragments that shed a light on our historical past.

Without giving too much away, we discover unpopular sightings of the country  such as the city of Coteaux, for example, where sits is a popular attraction called the  500 steps, dedicated to the Virgin Mary.

It is believed that the Virgin hears and grants the prayers of believers, especially women. In order to reach the shrine where the Miraculous Virgin can be found, people have to pay a pilgrimage and climb a 500-step stair. Going to the shrine through the long stair is almost the same as scaling the popular Great Wall of China.
[Ref: https://haiti.fandom.com/wiki/C%C3%B4teaux] 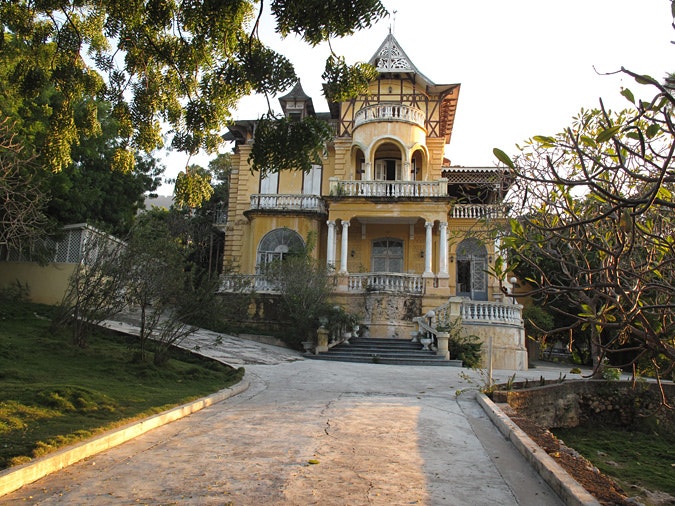 Continuing the exploration, did you know there are sightings of colonial houses in Haiti?. Beautiful gingerbread houses which could tell stories of our ancestors. At the turn of the 19th century, Port au Prince witnessed a blossoming of ornate architecture – taking a bit of style from New Orleans and some inspiration from Europe, Gingerbread houses started to be built by the city’s nobility.
[ref: https://ronalddehommel.photoshelter.com]

Or that we had a statue of the venerated and greatly respected, Anacaona, a Taíno cacique (chief), born in what is now Léogâne, Haiti, into a family of chiefs, and sister of Bohechío, chief of Jaragua. Her husband was Caonabo, chief of the nearby territory of Maguana. Her story is one of courage, leadership and heroism as she led an uprising against the Spaniards who came to colonize Haiti at the time.

Haiti was dubbed “La Perle Des Antilles” (The Pearl of the Antilles) for a reason, a name attributed to what could be the most precious and beautiful place of the Caribbean. Every borough in Haiti has something special they hold dear, whether it’s in nature or its people.

The movie BOYO brought all Haiti’s glory to light and left us all more than amazed. Historically known for being the first country to gain its independence from its colonizers, I am compelled to say that there is more to us than just that. Sprinkled with a little bit of romance and comedy, I believe that it showcases the true nature of our people. We’ve been through so much over the years, battling political turmoil to surviving natural disasters that it would be safe to say this movie would have been the best commercial for Haiti’s Department of Tourism.

Congratulations to Samual Dameus and  the whole team behind such an amazing project. The Film will be made available for free on their website boyofilm.com and we urge you to subscribe and pass it along.