Now this might be the coolest thing that any bank has ever done. In honor of Immigrant’s Heritage month, The OneUnited Bank decided to put out the coolest design on their card. Look at the flags, pride stems from this painting with all its glory. New York, Boston and  Miami are the melting pots of the Caribbean and Latin America, and we are happy to see such great support within our community. 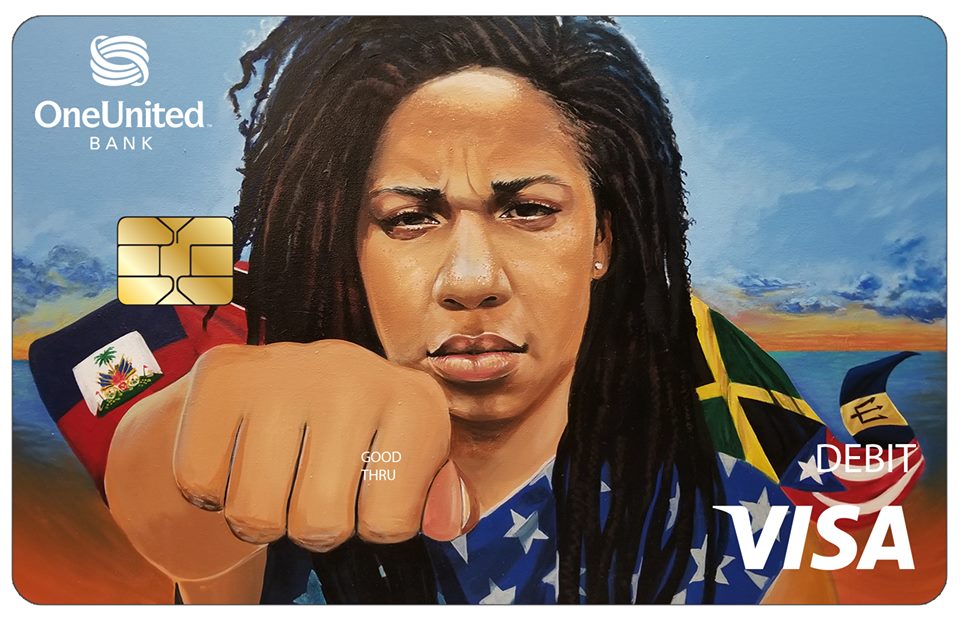 Boston, MA – June 26, 2018 – In celebration of Immigrant Heritage Month, OneUnited Bank, the nation’s largest Black bank, has released a statement in support of the immigrant community currently under intense national scrutiny. Concurrently, the bank releases the Justice Card featuring on its face a young black woman, fist out in solidarity and draped in flags to celebrate cultures that are the mosaic of America. The artwork was created by internationally celebrated muralist Addonis Parker.

As the largest Black-owned bank in America, we appreciate the difficult journey of immigrants and recognize their vast economic contributions to our country. Despite what we read in the press, immigrants contribute immensely to America’s success. Many of us are immigrants, children of immigrants or grandchildren of immigrants. We relate to our ancestral countries – such as Jamaica, Haiti, Trinidad or Barbados – while also embracing America. We consider ourselves to be Black, African-American and/or Caribbean-Americans. We strongly agree with Martin Luther King Jr. – “Injustice anywhere is a threat to justice everywhere.”

A recent internal study by the Department of Health and Human Services found immigrants brought in $63 billion more in government revenues than they cost the government.  A 2017 paper by Evans and Fitzgerald, “The Economic and Social Outcomes of Refugees in the United States: Evidence from the ACS” found that immigrants pay $21,000 more in taxes than they receive in benefits. Immigrants are also linked to greater invention and innovation in the U.S. According to a recent report by the National Foundation for American Policy, “immigrants have started more than half (44 of 87) of America’s startup companies valued at $1 billion dollars or more.” For many immigrants, business ownership is part of their cultural DNA. Recent studies, including “Achieving the American Dream: Cultural Distance, Cultural Diversity and Economic Performance,” show that immigrants overcome cultural differences and achieve economic success over time, especially in environments that are open to diversity and ready to accept their talents.

OneUnited Bank released this statement in support of immigrants because we know it’s important to have a positive and accurate counternarrative to the current negative and inaccurate press.

Media Contact: Suzan McDowell, Circle of One Marketing, suzan@circleofonemarketing.com, or 305-576-3790

OneUnited Bank is the premier bank for urban communities, the largest Black-owned bank, the first Black internet bank and a Community Development Financial Institution (CDFI). Its mission is to provide affordable financial services to support economic development in urban communities and maintain superior financial performance to maximize shareholder value. OneUnited is an FDIC insured bank and an equal housing lender.

The Carma Foundation’s 11th Annual Geminis Give Back Event

Overtown Music and Arts Festival returns this July in Miami