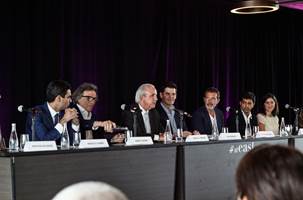 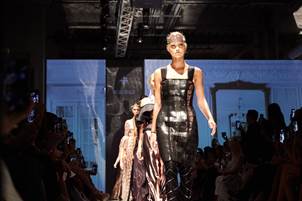 The conference was focused on the imminent global recognition of Miami as a fashion capital among New York, Milan, Paris and London since being named the second largest fashion week in the United States. Conversations also spanned topics of sustainability in the fashion industry, the evolution of Miami Fashion Week and the importance of giving back to the community.

Later that evening festivities began with the international fashion community filling the second level of Saks Fifth Avenue in Brickell City Centre (BCC) for the official MIAFW kick-off party. Stylized looks from each of the twelve designers showing at MIAFW were staged throughout the anchor store on models as chic onlookers enjoyed bites and beverages courtesy of Casa Tua Cucina.

Later that evening, guests arrived at the Ice Palace Film Studios, the official home of MIAFW, and experienced a runway by the creative students of Miami Fashion Institute at Miami Dade College. The dynamic collections included bold, colorful and futuristic clothing, setting the bar high for the next generation of fashion aficionados.

The night concluded with Miami’s very own, Rene Ruiz, who debuted his new brand “RENE by RR.” With ethical fashion being a global topic, Ruiz broke through sustainability by putting a glam spin on casual resort wear with upcycled materials. 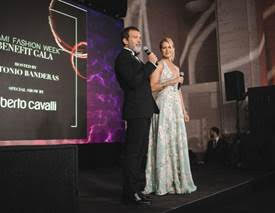 Back at the Ice Palace Film Studios, over 600 guests were in attendance leaving standing-room only for the runway presentations by Benito Santos and Ágatha Ruiz de la Prada.

Noble Spanish designer Ágatha Ruiz de la Prada followed with her models bouncing with energy, blowing kisses and getting cheeky on the runway.  With the brand’s signature fun-loving style, the exclusive resort collection unleashed a rainbow-spanning palette that was smacked with stripes, hearts and patterns.

For the first time in its history, Roberto Cavalli unveiled a special curated luxury collection at the gala to an audience of A-list celebrities, global influencers and fashion leaders. The collection embodied a modern design of beauty and sensuality with a fresh perspective on glamour. Featuring 25 looks from the brand’s collection, the Roberto Cavalli team donated an evening gown of the SS 2005 Roberto Cavalli Collection to the live auction. 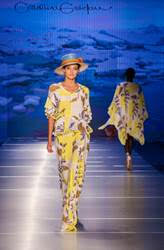 That evening the Ice Palace Film Studios saw a total of over 1,000 guests flowing in and out for four spectacular runway shows by Daniella Batlle, Carolina Estefan, Lina Cantillo and Custo Barcelona.

Fashion designer Daniella Batlle showcased a sensual and feminine collection with tribal elements and pastel colors. Battle designs are inspired by a combination of textiles, colors and styles from different regions of Colombia. Carolina Estefan took the stage and showcased an exclusive collection with abstract patterns, silks and flowy silhouettes.

Later that evening, Lina Cantillo showcased her 2019 resort wear collection, which focused on the revolution of silhouettes of the contemporary man. Her collection included European influences, which were tailored for the Latin man.

Custo Barcelona closed the night with a theatrical flair filled with powerful, self-assured women. The collection featured a range of fabrics from velvet, silks, knitted jacquard, shimmering nylon and lace. With an empowering runway show, guests’ eyes sparkled as they experienced an assortment of metallic elements in gold, silver and copper tones. 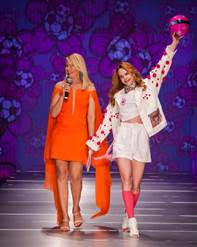 Later that evening, MIAFW announced its five winners of the ‘First Faces’ social media competition, which ran from May 8 – 26, 2018. Emily Hutchison, Brittany Jean, Caroline Grillo, Patricia Mendez, and Karen Soto each had the unique opportunity to open one of MIAFW’s runway shows by star-studded designers.

At the final show of MIAFW, Venezuelan-born fashion designer Ángel Sánchez came to impress with his architectural elements, bright colors and contemporary silhouettes. Ruffles and flowing frills made their way down the catwalk in various silhouettes of pink, green, nude, black and white pieces.

The week came to an end with a vibrant closing party at Delano Beach Club. In collaboration with MIAFW, Goleadoras showcased one-of-kind pieces to support #GirlsWithBalls, which fosters education and empowers girls through soccer.

The Carma Foundation’s 11th Annual Geminis Give Back Event